My struggles with giving my children the best start to life!

I have found this post really hard to write. I have started it several times before deleting it again. It was going to be about how eating healthily in childhood is really important, and feeding your children the best food sets them up for life. But here’s the thing; my children don’t exactly eat brilliantly. Far from it!

It wasnt going to be like this. In my world before I had children, where I was a hypothetical parent, my children ate only the best local fruit and veg and shunned the very idea of chips or chocolate. They didn’t even know what a packet of crisps was. Being the family with all the best and freshest foods at our fingertips, we were going to rock eating healthily. I started off well too. After being solely breastfed till 6 months, my now 3.5 yr old Arthur, started munching his way through boiled sticks of veg, soft grabbable pieces of fruit, yoghurt, scrambled eggs, pasta & grains. You name it, whatever we presented him with he ate, he embraced baby led weaning and never had refined sugar pass his lips. It was all going so well! But when he was around 14 months, it all fell apart. Around the time I became pregnant again, the business was really busy, we moved house, you know how the story goes. Arthur stopped eating, probably just a phase connected to teething, but as a parent you worry. And when you are busy and stressed you offer them whatever they will eat. Sugar creeps in, unhealthy snacks creep in, and before you know it we have a child that would live on bread, bananas, biscuits and chips if I let him. Oh and of course, ice cream! There are times that I have wondered if it was my fault for getting him into bad eating habits, perhaps because I prevented him from having things and now he’s gone mad with them, perhaps because I didn’t keep strong for long enough and say ‘no’ more, and perhaps (most likely, and hardest to take) because we have had spells of eating badly ourselves, and children learn from what they see. Or perhaps I should not blame myself at all. Because my youngest, Leo, had exactly the same start. He went from exclusive breastfeeding, to baby led finger foods, to joining in with whatever we were eating. Snacks crept in (which he loves), yet he eats a huge variety, he loves healthy foods, he never has spells of not eating, or cutting the food he finds acceptable down to 4 items. So maybe it’s just them as people, or perhaps I should say, maybe it’s just them as CHILDREN.

Arthur leaning how to feed the hens

I’ve thought long and hard about how I fix this, because my children growning up happy and healthy is obviously the most important thing to me. And I won’t be beaten. I still offer up healthy meals everyday, even if I know Arthur won’t touch it, and I still put a bit of salad on their plates, hoping for that one day they might give it a go. I try to give as good an example to them as possible, as I think this is really important. But I’ve had a bit of change of tack recently, after some important realisations I have had, and it’s turned meal times from a “please just try a bit/ aren’t you hungry?/ mummy is enjoying hers/ lightening McQueen eats this to make him big and strong” affair, to a much more joyous family occasion! It goes a little something like this…

So after a particularly frustrating bout of Arthur not eating, around the time Leo was weaning, I was saying to my husband, Ben “what are we going to do with him, he can’t exist eating 4 foods for the rest of his life, and if we take those away he just doesn’t eat, for ages! The baby is eating more than him! We have the best food imaginable and all he wants is mini cheddars- what are we going to do?’. And then we realised, we should do nothing. Well not nothing, but we should lay off the trying to encourage him, because that actually makes him resist more. Because how many of us as adults only eat what we did as a child? Our tastes change all the time, we try new things all the time. And actually when you think about it, I haven’t met many parents that say their children eat a perfect diet, without a hint of ‘I wish they ate a bit more of this/ a bit less of that”. So if I’m not going to worry about what he eats, how do I send him off into the world satisfied that I’ve done my job as a parent? Instead of trying to make him like certain things; teach him ABOUT food, where it comes from, what makes it healthy/ not healthy and most importantly, HOW TO COOK! EUREKA!!! 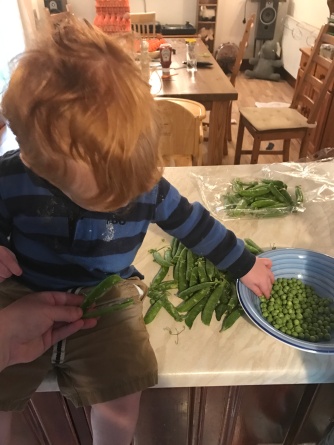 This has changed our lives. Arthur loves helping to cook, and Leo is starting to get involved too. Ok, it’s not always ideal having 3.5 and 1.5 yr old try to muscle in, but whenever I can I’m trying to get them involved. Arthur loves stirring and singing while he goes. While we prepare food he can learn about all the individual ingredients that make up a dish, and then when it gets dished up on their plates it’s much more approachable, he even tries new things now! The other day, both boys were helping me pod peas and broad Beans to go in our vegetable risotto, and while podding them and singing ‘peas peas they are so yummy’ from Tractor Ted, Arthur reached in the bowl and ate a few; this was unthinkable a few months ago. Leo was also stealing them, but he try’s everything! Another victory is that now our free range flock of chickens are outside our house instead of down at the farm yard, both boys help to collect the eggs each day. Now, Arthur hasn’t tried an egg since he was about 9 months old, however they are cooked and presented to him he treats it like I’m serving up poison. Since he’s had involvement in the hens, and collecting the eggs he has started to try them, and realised he loves them. Last night he ate a whole egg. He didn’t eat anything else, but I will take that.

Mealtimes are happy again! Mummy is happy again! I have realised the importance is not on making them love spinach as toddlers but giving them the skills in life to know where their food comes from, the value of it, and how to cook it. They will not become teenagers that don’t know what a cauliflower is, or where milk comes from! I won’t lose any sleep if today they don’t want to try their stir fry, but I will make sure they know what a stir fry is and how to make it, because when they grow up and their tastes change they will have the SKILLS they need to live healthy lives. They will know that cake is a treat, they will know that we cook at home and we don’t live out of packets, and they will know where food comes from. Most importantly they will know preparing food is good and positive and NOT that mealtimes are a black cloud hanging over us. I’m sure that if they have the right skills and knowledge, and built a solid foundation, the rest will follow. I once met a girl that told me whilst growing up that her parents did not say ‘no’ to any food. But the catch was she had to make it. Want a cake? Fine, we have all the ingredients, let’s get to work. I thought this was crazy at the time but now I think it’s brilliant! I might implement this when mine become teenagers. Because not only does it practice your skills, it tests how much you really want that cake!

So there it is, my journey from wanting to say that eating the best food sets your kids up for life, but not being able to truthfully say mine eat the best! BUT, actually realising that EDUCATION and SKILLS about the best food can set them on a healthy and happy path. And those things, I can provide!

2 thoughts on “‘To pod the peas or eat the peas’, that is the question…”