We really love cooking Asian food at home. Well Ben loves cooking it and I love eating it! As our quest continues to get a bit fitter and healthier and fit back in our old clothes, it’s a cuisine that fits in well. It’s a great way to get loads and loads of flavour into a meal, you can pack loads of veg and lean protein in, and it’s not too naughty. So tasty, filling, and the children even eat some if we have noodles. I think they believe it’s spaghetti and Tom & Jerry eat Spaghetti! Whatever works to get them trying things.

So today’s recipe is for Ben’s King Prawn & Edamame Bean Chow Mein Style Noodles. This need a bit of forethought as the prawns need to be put into marinade a few hours before cooking, but once that’s been accomplished the actual meal is really quick to cook. We buy raw prawns because it’s much easier to get the flavour into something that hasn’t already been cooked, but it would work with cooked ones also if you can’t get hold of raw. We have never paid full price for raw prawns because they are ALWAYS reduced in the supermarkets, maybe everyone tends to opt for ready cooked ones?

For the Prawns & Marinade: 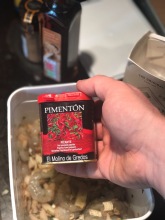 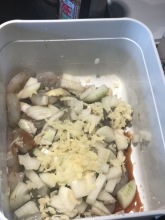 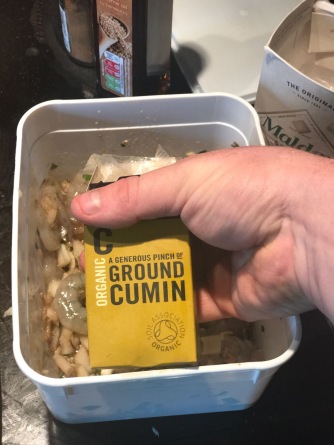 To make the marinade, simply combine all the above ingredients in a sealable tub, and mix together well to incorporate. Put the lid on and put in the fridge for at least 2 hours. Ben prepared this at lunch time so it was ready for out evening meal.

Mixed veg for stir-frying (be creative)

Edamame Beans (amount according to your preference) 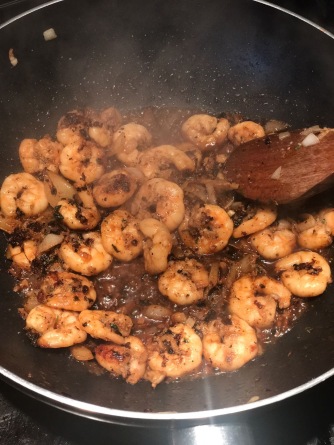 To begin, heat sesame oil in a wok. Tip the entire contents of the prawns and their marinade into the pan. Stir fry until the prawns are completely pink and the sauce caramelised. Add the drop of water to deglaze the pan and stop it from sticking. Add in the veg and bean sprouts and stir fry. Finally, add in the noodles until they are warmed through and emulsified with the sauce. Serve this onto plates, then put Edamame beans into the used wok and back onto the heat. Stir for a minute until they are warmed through and have used the additional sauce that was left in the pan. We always keep a bag of Edamame beans in the freezer as a quick add or finishing touch to a stir fry. Sprinkle the beans on the top of each plate, and top with a sprig of coriander.