I know this has nothing to do with food or farming but it’s a message I really want to share, and fits in with our drive to be a bit more eco friendly at the shop too.

In January 2018, I met the love of my life. Well, the only thing I’ve ever purchased that I really love anyway; my Zoe. 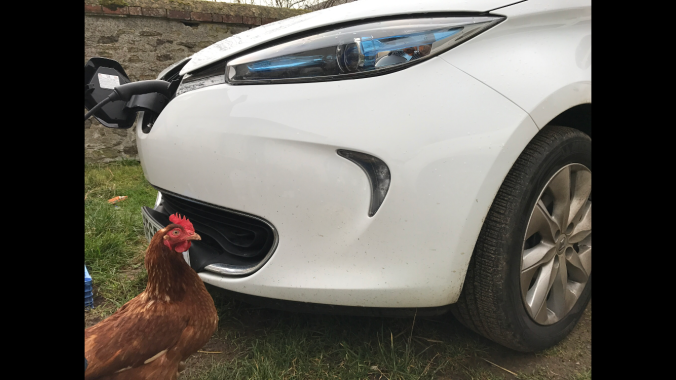 After changing our home energy supplier to Bulb, a company that supply 100% renewable energy, I decided that it would be a great idea to run a car on said renewable energy, I wanted to be powered by the wind, so to speak. So I started my quest for an electric car. People with whom I discussed my idea reacted like I’d sprouted an extra head. And had lots of suspicious questions, as detailed below. Car sellers themselves even tried to suggest a hybrid to dampen it down a bit. But after I asked them why I’d want a hybrid instead of a 100% electric car they would just say “customers usually feel more comfortable when transitioning to a hybrid”. But I didn’t want to ever visit a petrol station again. If I was going for it, I was going for it!

Initially I thought I’d get a new car, the new “leaf” by Nissan was being advertised- but I soon realised that if you want a new electric car you have to be very very patient indeed. There was at the time (end of 2017) a huuuuge waiting list for new electric cars, they simply couldn’t be made fast enough. The MOT was nearly up in my old diesel car so I decided to go second hand to get a car straight away. The great thing about a used electric car is that they are usually really low mileage. As the range is fairly low, people don’t tend to buy them that commute up and down the country. The annoying (beyond annoying actually) thing however, was that scrappage was being offered on old diesel cars at the time, when you upgrade to a more eco friendly engine. This offer was not extended to an electric car though. Work out that logic!

Anyway I got my Renault Zoe in Jan 18 and it’s been a match made in heaven so far. As I have off road parking at home, I was eligible for a government grant that contributes towards getting a charge point installed at your house. I also have nothing to pay in road tax and I estimate my electric usage has gone up by about £5 a week (compared to the £70-80 I used to spend in fuel). But as I was saying before, there have been LOTS of question. I think the problem with electric cars is that we are not yet used to them as a society so we react with suspicion. Here are my most asked questions along with my answers:

1) What if you forget to charge it?

2) How long does it take to charge?

Answer: Don’t know, I’ve never ran it out! I just plug it in when I get home and it tops up.

3) Why does it make a whirring noise when you slow down?

Answer: the brakes regenerate electricity and send it back to the battery.

6) How often do you have to put petrol in it?

Answer: No, it has a stop and a go pedal. Like a go cart.

Answer: and herein lies the only problem….

The range in my Zoe is supposed to get to 100 miles plus but I’ve only ever really got 60 miles. For me, this has not been an issue. It’s my “school run” car. It goes out several times a day but only ever on fairly short trips. If I’m going on a longer trip I put it in “eco-mode” which limits how hard you can accelerate and the power of the fans and brightness of the displays etc and you can get quite a bit further. But so far have only been able to have this as a second car. We have had to keep our truck as well, so that if we are visiting family that live further afield we have a way to get to them.

BUT technology and production is moving fast, and with it battery life and charging points are improving dramatically. We are now at the point we can trade in my beloved Zoe AND our diesel guzzling truck and replace it with a new electric car with a big enough range that it will do everything.

I have put my faith in wind power and it has delivered. I hope that if someone reads this that’s on the fence, this gives them the confidence they need to take the plunge. I’ll finish with 4 final benefits that you may not have thought of:

1) most (extortionate) car parks now have charge points that are free to park in, you just pay for the electric you put in while parked (which you are gonna need anyway) saving you a packet overall

3) I have always hated driving. Yet, I find it’s now tolerable, heck I’d even go as far as enjoyable

4) I’ve never washed my car and live on a farm up a long off road track, she is supposed to be white but is actually practically black…yet she is still the cleanest car in most car parks…boom!

4 thoughts on “Reducing My Tyre Print”